El Paso, Texas — A gunman killed 20 people and injured 26 others Saturday after he opened fire at a Walmart in El Paso, Texas.

“Texas grieves with the people of El Paso today,” said Gov. Greg Abbott at an evening news conference following the deadliest mass shooting in America since a gunman killed 26 people at a church in Sutherland Springs, Texas on Nov. 5, 2017.

The suspected gunman has been identified as 21-year-old Patrick Crusius of Allen, Texas.

Officials say he was taken into custody without incident.

Terrible shootings in ElPaso, Texas. Reports are very bad, many killed. Working with State and Local authorities, and Law Enforcement. Spoke to Governor to pledge total support of Federal Government. God be with you all!

Every Democratic presidential candidate jumped on the political bandwagon and the public quickly took notice.

One reader, Layla Gonini, wrote,  “While 20 bodies still lie on the WalMart floor, Democrats are quickest to politicize the tragedy in El Paso. Disgusting‼️”

People have barely had time to comprehend this tragedy, while Democrats are seemingly worried about elections stats.

Gov. Greg Abbott said, “Listen, there are bodies that have not yet been recovered. I think we need to focus on memorials before we start the politics.”

Information on this tragedy is still coming in as investigators comb through all of the evidence. 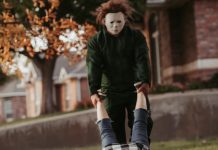 She thought it was just a Halloween photo shoot, it was much more