Florida — On May 26, 2022, Gov. Ron DeSantis signed HB 1435 into law, which includes a previous statute that was struck down by the Florida Supreme Court.

Florida residents say reading the bill is enough to make a person who believes in the constitution, “cringe.”

A section of the bill, FS 316.3045, which allows cops to write tickets to anyone playing a radio that can be heard more than 25 feet away, was previously ruled by the Florida Supreme Court as unconstitutional.

The re-written statute includes factory radios, which many vehicles, particularly luxury vehicles, now come from the dealership with stereos equipped with amps and subwoofers. The same types of vehicles lawmakers drive around in.

The statute does not stop at car radios, the statute now reads in part as follows to include;

“Radio, tape player, compact disc player, portable music or video player, cellular telephone,
tablet computer, laptop computer, stereo, television, musical instrument, or other mechanical or electronic sound-making device or instrument, which sound emanates from within the motor vehicle, so that the sound is plainly audible at a distance of 25 feet or more from the motor vehicle.”

The statute exempts police vehicles. The statute previously exempted vehicles being used for political reasons and business vehicles such as ice cream trucks, but that verbiage has now been stricken from the statute.

Essentially, the way the statute reads, a person operating an ice cream truck could now be pulled over and cited. Additionally, any person using a loud horn or megaphone to express political views could have their rights violated.

The same statute was challenged in 2012, (STATE v. CATALANO) after a Pinellas County police officer pulled over an attorney, Richard Catalano, and wrote him a ticket for playing Justin Timberlake too loud from his factory stereo.

Catalano argued that the Florida statute impinges on his free speech rights and the supreme court agreed.

The court stated, “There is a strong presumption that a statute is constitutionally valid, and all reasonable doubts about the statute’s validity must be resolved in favor of constitutionality.” See DuFresne v. State, 826 So.2d 272, 274 (Fla.2002).

“This Court has noted, however, that in a vagueness challenge, any doubt as to a statute’s validity should be resolved in favor of the citizen and against the State.”

Attorneys and stereo shop owners say police use loud music as a reason to pull people over in hopes of finding other violations and nothing more.

The statute also includes motorcycles with radios that can clearly be heard more than 25 feet away.

Some Florida sheriffs have already said they were sworn to uphold the constitution and will not enforce the statute, especially since it was previously shot down by the supreme court.

“GPD will enforce HB 1435, which was signed into law by Governor DeSantis on May 26, 2022,” GPD said in a statement. As will Sheriff Chitwood

Attorneys encourage any drivers who receive a citation for loud music to take it to court, preferably the Florida Supreme Court.

This means, any event such as the annual gathering of trucks in Daytona Beach, that was organized via social media and not “sanctioned” by a local government.

Rep. Anthony Sabatini of Howey-in-the-Hills voted against the bill.

Sabatini, said, “[The bill] gives police too much power.”

Police, at their own discretion, can now designate a large area a “special event zone” if a large number of people gather. But so far, the law has been directed at those who drive pickup trucks and gather in Daytona.

Senators say the new law allows for law enforcement to impound vehicles as they see fit and write a citation for just about anything, including the suspension on a truck that an officer finds to be “out of compliance.”

Chitwood also threatened to put a lien on the house of any parent if a promoter of the truck event lives with his parent(s).

Chitwood said he does not invite, as the Chamber of Commerce says, “wide-open fun.”

Chitwood does not want “truckers” in his neighborhood. Instead, they want the event to relocate to Homestead Florida.

Attorney Laurence Miles says he is looking forward to helping the more than two dozen people who had their trucks impounded this past weekend in Daytona. He said it is inevitable that this bill will end up before the Supreme Court and has no doubt that it will be deemed unconstitutional.

Chitwood said events have to be planned legally. However, promoters said that they are always denied even though bikers, Jeepers, and every other organized event are always allowed.

Promoters say Chitwood and those who issue permits discriminate against certain crowds.

Sen. Bobby Powell of West Palm Beach also said that the bill gives sheriffs too much power and opens the door for law enforcement to deem an area for protestors as a “special event zone” in which protesters would be harassed by cops and have their vehicles impounded and civil penalties imposed.

Sen. Jeff Brandes, a St. Petersburg Republican said that the bill goes too far and would allow a sheriff’s department to declare an entire city or county a “special event zone” in an attempt to keep out a specific group.

Many senators say the bill is government overreach at best.

Brad Lansing, who owns a custom truck shop and also drives a “jacked up truck”, wrote, “Daytona is no longer a family-friendly town. It is more like visiting a Nazi town where you are constantly being followed and harrassed if you drive a truck.” He went on to say, “I cannot tell you how many countless times I have been followed in that town and stopped because of ‘suspicion’ that my suspension on my truck was too high. Every time I drive off with no ticket because ‘it barely meets the legal limit.’ It is harassment in the highest form and that is why I no longer patron that town and spend money.” Lansing said, “When that place becomes a ghost town the restaurant and other business owners who go under can blame their local government.”

One event promoter wrote in a Facebook post that Spring Break Nationals in Daytona, sometimes called Daytona Nationals, used to be a huge deal. People came from all over to see show-stopping low riders and massive stereos. The promotor said they were always harassed by the local government…” particularly Chitwood and his crew.” Namely because during the show, which was permitted, authorities said the stereos in demo vehicles were too loud. Many of those vehicles belonged to audio designers such as Kenwood, Sony, and Orion. Daytona businesses lost thousands of dollars in revenue when the event was canceled.

Spring Break Nationals not only attracted the attention of major audio and other corporations but often drew in celebrities.

According to Daytona officials, law enforcement issued 688 traffic citations and towed 46 trucks Friday through Sunday during the truck meet. 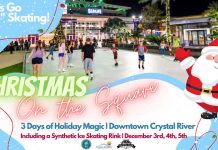