– A Tropical Storm Watch has been issued for Highlands and Polk

A flood advisory has been issued for parts of Citrus County

The National Weather Service has issued a Flood Warning for the following rivers;

The warning will remain in place until Thursday evening.

According to the NWS, recent rainfall atop saturated soils due to rainfall over the past several weeks has resulted in the Withlacoochee River at Holder to rise into flood stage. Levels will continue to be monitored for any impacts from additional rainfall.

The Withlacoochee At Holder and the Peace River At Bartow continue to remain in flood stage due to recent heavy rain. Water levels are expected to remain fairly constant for the next couple days.
However, as Dorian approaches the coast, water levels could rise once more.

Do not drive cars through flooded areas.

SITUATION OVERVIEW
——————
Major Hurricane Dorian is forecast to drift west through the northwest Bahamas and then turn north along the Florida east coast over the next few days. At this time the primary concern is for tropical-storm-force winds over Highlands and eastern portions of Polk county.

Potential impacts in this area include:

– Some damage to roofing and siding materials, along with damage to porches, awnings, carports, and sheds. A few buildings experiencing window, door, and garage door failures. Mobile homes damaged, especially if unanchored. Unsecured lightweight objects become dangerous projectiles.
– Several large trees snapped or uprooted, but with greater numbers in places where trees are shallow-rooted. Several fences and roadway signs blown over.
– Some roads impassable from large debris, and more within urban or heavily wooded places. A few bridges, causeways, and access routes impassable.
– Scattered power and communications outages, but more prevalent in areas with above-ground lines. Also, prepare for the hazardous wind having possible limited impacts across the rest of west-central and southwest Florida.

Now is the time to check your emergency plan and emergency supplies kit and take necessary actions to protect your family and secure your home or business.

When making safety and preparedness decisions, do not focus on the exact forecast track since hazards such as flooding rain, damaging wind gusts, storm surge, and tornadoes extend well away from the center of the storm. If in a place that is vulnerable to high wind, such as near large trees, a manufactured home, upper floors of a high-rise building, or on a boat, plan to move to safe shelter. If you live in a place particularly vulnerable to flooding, such as near the ocean or a large inland lake, in a low-lying or poor drainage area, or near an already swollen river, plan to move to safe shelter on higher ground.

Always heed the advice of local officials and comply with orders that are issued. Do not needlessly jeopardize your life or the lives of others.

When securing your property, outside preparations should be concluded as soon as possible before conditions deteriorate.

The onset of strong gusty winds or flooding can cause certain preparedness activities to become unsafe. Be sure to let friends and family members know of your intentions for weathering the storm and your whereabouts. Have someone located away from the threatened area serve as your point of contact. Share vital contact information with others.

If you are a visitor, know the name of the county or parish in which you are located and where it is relative to current watches and warnings.

If staying at a hotel, ask the management staff about their onsite disaster plan. Listen for evacuation orders, especially pertaining to area visitors.

NEXT UPDATE
———–
The next local statement will be issued by the National Weather Service in Tampa Bay Ruskin FL around 6 PM EDT, or sooner if conditions warrant. 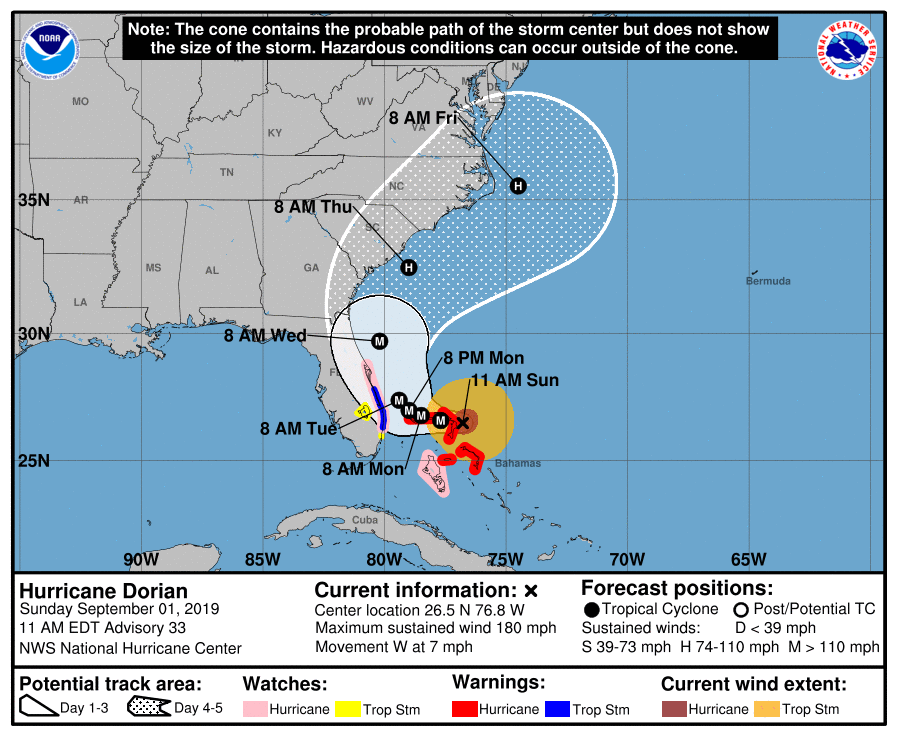