An Orlando woman was arrested and charged with Attempted Murder and Aggravated Battery with a Deadly Weapon after she tried to stab her baby’s father.

Police say Gabrielle Nunez, 21, and her boyfriend, who is not being named, had just finished having sex and that her boyfriend had fallen asleep.

While the boyfriend was sleeping his phone rang and Nunez answered it.

According to the arrest affidavit, it was another woman on the other end of the phone.

The woman asked Nunez why she was at the apartment, at which time her boyfriend awoke and asked why she was answering his phone.

Nunez was holding their 11-month old baby as she was yelling at him.

She then put the baby down, retrieved a butcher knife from the kitchen, and chased her boyfriend toward the bedroom.

He ran into the bedroom and closed the door, but Nunez kicked it open. The man then locked himself inside the bathroom.

Nunez continued to kick and stab the door while screaming, “I will kill you.”

Nunez was eventually able to force her way into the bathroom. The two the struggled with the knife and the man was able to take it from her.

When police arrived, the man had Nunez pinned to the floor.

Nunez was arrested and transported to the Turner Guilford Knight Correctional Center. She is being held without bond.

Nunez is from Orlando but was visiting her boyfriend in Miami. The incident took place at the Panorama Tower apartment building. 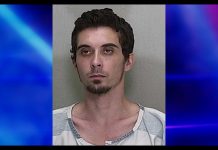 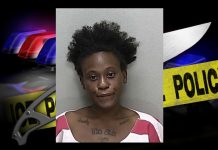